Whether you have a big group of kids to entertain or just a few, you may find yourself looking for ways to minimize physical contact while they play. Non-contact playground games can be a great way to include everyone, regardless of ability, while helping to reduce the spread of germs and the chance of injuries. In many cases, you don’t need any extra materials, either..

Take a look at some fun outdoor games without touching to help you make the most of their playground time.

Games without physical contact can help kids play to their ability levels and help them avoid germs while reaping all the benefits of outdoor play. From kicking a ball around to bouncing through a hopscotch course, kids have plenty of options for playground games that don’t involve touching.

First up is human foosball, sometimes called zone soccer. As the name implies, it works like a game of traditional foosball — but big! You’ll need a soccer ball and some way to mark zones, like a rope or cones. The number of players determines the number of zones you’ll need. Divide your playing field into that number of zones. Split the players into two teams and disperse them evenly across the field. A regular checkerboard pattern works great.

The game works a lot like soccer. Flip a coin in the center to decide who starts then off they go! Human foosball moves slower than soccer, and players will strategize about how they’re passing the ball. You can play with or without a goalie, depending on the kids’ needs and play styles. It’s a fun twist on soccer that also happens to help them keep their distance.

Riverbank has a bit of a Simon Says feel to it because, as the speaker, you get to confuse the kiddos as much as possible. The premise of the game is pretty simple. Find or make a straight line — a rope works well, but you could also use two cones or draw a line in the dirt. This is your riverbank. Get everyone together in one line and tell them they’re standing on the bank of the river. You’ll shout, “In the river!” and everyone has to jump over the line and into the “water.” Then, when you say, “On the bank!” they all jump back across as quickly as possible.

Keep instructing them to jump across the bank. This alone can be pretty fun, but you keep them on their toes, too. If they’re already on the bank, say “on the bank” again. If they jump to the river, they’re out. This is a great way to get kids energized without any complicated setup.

This one’s a classic. Simply play some music and have the kids dance their hearts out. Then, without warning, stop the music. Everyone has to freeze in place, no matter how weird their dance moves are. If you see them moving after you pause the music, they’re out. You can also be the judge of whether they’re dancing enough. If not, they’re out, and the last one dancing wins! This is a good way to make sure kids aren’t trying to limit their dancing to avoid losing their balance or moving after the freeze.

Bring this game up a notch by letting kids make the music. With musical playground elements like a conga set, chimes or xylophone, you can assign some kids to be the band members and play songs as wild and wacky as they please. When you give the signal, they stop, and their peers have to freeze. It’s a great way to get the kids more involved.

For this activity, you need some chalk and a surface to write on, like a sidewalk or parking lot. Give each kid a piece of chalk and let them doodle to their hearts’ content. You can also have them work together to make a chalk walk or a sensory path. Each kid is in charge of one section of the path. They’re tasked with making the pathway a little more exciting. They could draw squiggly lines to follow or circles to step in. They can even make themes, like ocean creatures or outer space, to tie it all together.

With chalk walks, kids work at a distance but still get to collaborate to create a long, interesting course. When they’re finished, they can take turns walking it and trying to stay “in the lines.” Some kids even turn it into a challenge, making walkers balance on a line or hop long distances. 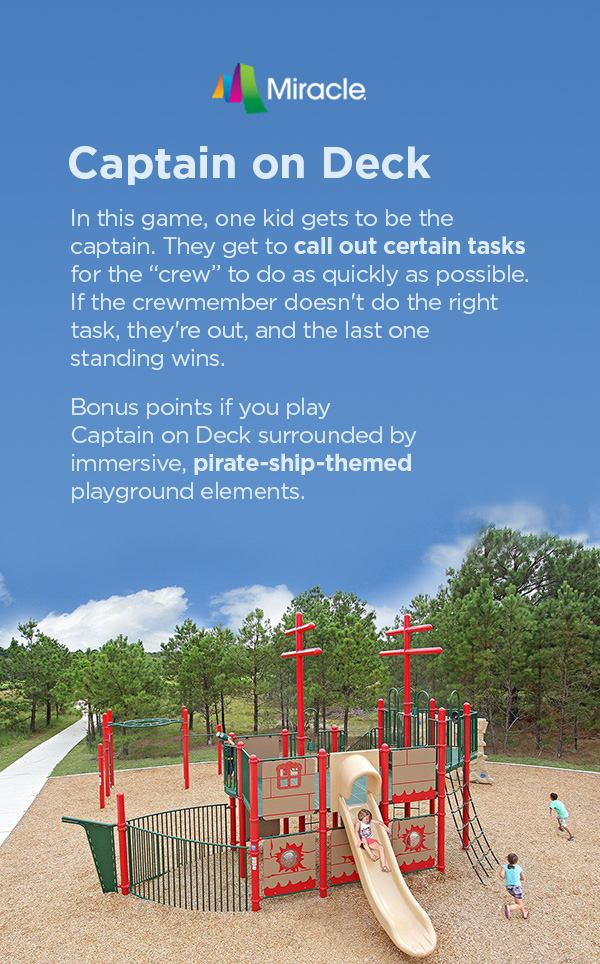 If you want the kids to burn off some energy, Captain on Deck is a great pick. In this game, one kid gets to be the captain. They get to call out certain tasks for the “crew” to do as quickly as possible. If the crewmember doesn’t do the right task, they’re out, and the last one standing wins.

You can use the following tasks or even make up your own:

Bonus points if you play Captain on Deck surrounded by immersive, pirate-ship-themed playground elements. You can turn many of these games into fun, imaginative experiences. You could play Riverbank on a nature-themed playground or make a chalk walk with exciting themes.

Here’s another classic playground game. One person — either an adult or an older kid — plays the part of Simon and shouts out simple tasks for everyone to do. They might say, “pat your head,” “spin in a circle” or “clap your hands.” As long as they say “Simon says” before the task, everyone has to do it. If they don’t say “Simon says,” players should not do the task. If “Simon” catches anyone doing the task after they didn’t say “Simon says,” that person is out. Repeat the process until just one person is left standing and crown them the winner.

You’ll probably need to ramp up the difficulty at some point. You can say a non-Simon Says task while doing the task yourself or shout multiple commands in quick succession, sneaking in an invalid one to trip them up. Simon Says is great for all ages and easy to adapt for ability levels.

This activity is a little more relaxed — great if you need to take a beat. Have the kids sit in a big circle and say, “I spy with my little eye something that…” Finish the sentence with a characteristic of different items you see around you, like the playground equipment, trees or the building. You could use letters, colors, sizes and many other descriptors to make your sentences. You might say you spy something beginning with “S” in reference to the swing set or something brown, referencing to the school.

After you’ve said your sentence, kids shout out their guesses. Whoever gets it right gets to make the next sentence. I Spy helps kids flex their observation skills and work on their vocabulary through descriptive words. The outdoors is the perfect backdrop because there’s so much to look at, especially if your playground has a lot of fun elements.

Hopscotch blends creativity and physical activity in a classic way. Give the kids chalk and have them draw out a hopscotch path with connecting squares filled with ascending numbers. Then, a kid tosses a bean bag, pebble or another object onto one of the squares. They start hopping along the path and skip the square that has the object. On their way back, they have to pick up the object.

You can make hopscotch easier for younger kids by having them hop to the end of the path without worrying about the object. If you need to increase the difficulty, add multiple throwing objects or see who can complete the course the fastest.

Scavenger hunts are another great way to play without any physical touching. The term “scavenger hunt” can mean a few different things, but people often use these methods:

Scavenger hunts are especially fun if you have a playground full of hidden nooks and crannies and interactive elements.

Something as simple as a jump rope helps kids keep their distance while playing together. Have a jump-rope tournament or help them learn fun moves like:

You can also teach them jump-rope rhymes like Cinderella and Teddy Bear. Cinderella is a simple counting chant, while Teddy Bear has kids do extra tasks while jumping like turning around, touching the ground and miming turning off a light. If you have a limited number of jump ropes, chants are also a great way to involve the whole group, even if only a few people play.

Choose someone to play the role of detective. This kid must leave the area so they’re out of earshot. While they’re away, the group picks a secret leader. The detective returns. When the detective isn’t looking, the secret leader starts doing some kind of movement, like jumping or patting their head. The rest of the group copies them. The detective’s job is to find out who the leader is. They get three guesses before the leader is revealed. Then, the leader takes over as detective, and the next game starts.

Instead of spreading players out in an open space, up the difficulty by having them stand in different places on the playground. This makes it a little harder for the detective to see everyone at once.

If you have some bean bags and a bucket, you can set up a bean bag toss. You could also use some kind of marker, like a rope or hula hoop, to designate the goal space. Place the goals across from each other, with a kid at each one. Supply the players with a handful of bean bags to toss toward the opposite bucket or goal. The more bean bags they get in the bucket, the more points they get. Older kids can keep score while younger kids can simply play for fun.

Bean bags are good for a wide range of other activities, like catch and balance competitions, where kids see who can balance the bean bag on body parts — like on top of their head or arms — the longest.

Playgrounds are the perfect backdrop for these non-contact activities for kids. They create memorable environments for all sorts of games and provide exciting spaces for socially distanced adventures. At Miracle® Recreation, we’ve been bringing playgrounds to life for decades, putting quality and innovation behind everything we make. Our representatives are ready to help you meet your goals of enabling play from a distance.

From individual playground elements to entire sets, Miracle Recreation can help you build the ideal play space for kids of all ages and abilities. Explore our playground equipment online or reach out to a representative to learn more.

All product and company names are trademarks™ or registered® trademarks of their respective holders. Use of them does not imply any affiliation with or endorsement by them.