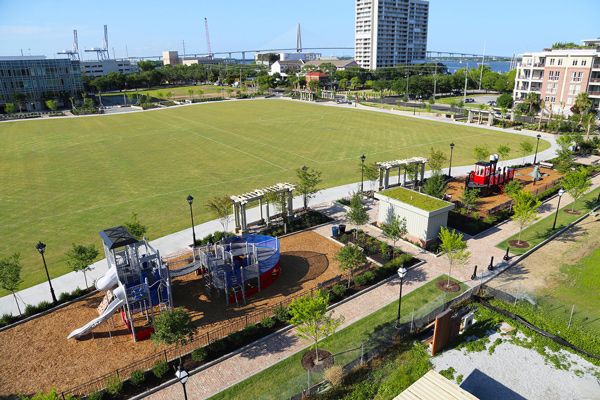 Gadsdenboro Park in Charleston, SC has not always been the beautiful destination that it is today. This 5-acre park, formerly known as Concord Park, resides at the center of a 10-acre parcel that is bordered by Calhoun, Concord, Laurens and Washington streets. Gadsdenboro Park is positioned in the center of a vibrant tourist area, sitting in close proximity to many of Charleston’s attractions, including the new site of the International African American Museum and the South Carolina Aquarium. The park is also directly across from the Charleston Maritime Center. It was the proximity to the ocean and Maritime Center as well as Charleston’s history and reliance on the rivers that inspired the nautical theme for the new playgrounds at Gadsdenboro Park.

The site at Gadsdenboro Park had long sat vacant before the city devised the plan to develop the location into the bustling and picturesque park that visitors enjoy today. The land has a long history in the public realm. It began as a public housing site in the 1940s, known as the Ansonborough Homes complex. In 1989, Hurricane Hugo wreaked havoc on the site through severe storms and flood waters. It was also later discovered that the grounds were contaminated by an old coal gasification plant, which led to the demolition of the homes in 1992. Though the contamination was cleaned up, the land remained a starkly vacant location for over a decade. 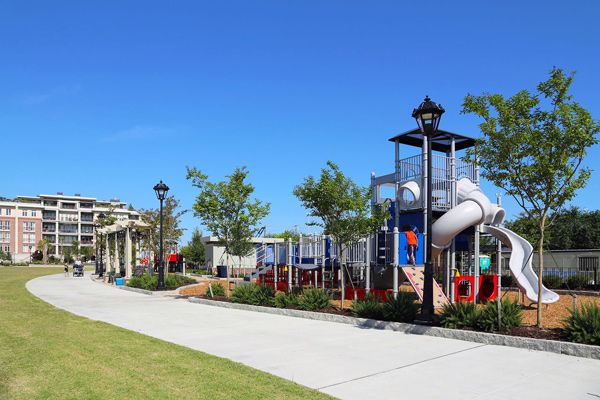 Paved walking paths allow easy access for park visitors to enjoy the many amenities of Gadsdenboro Park. Over 100 trees envelop the park, providing a charming oasis in the middle of a bustling tourist area.

In addition to the new park, plans are being developed for mixed-use development on the parcel, as well as the five-story Williams Terrace Senior Housing building which opened in June 2015. The $5.7 million park project created a destination for all to enjoy. Wrapped in trees, the park also includes soccer fields in the center, paved walking paths, game tables, adult swings, a bocce court, a custom fountain art feature and public restrooms, in addition to the two custom playgrounds for different age groups. 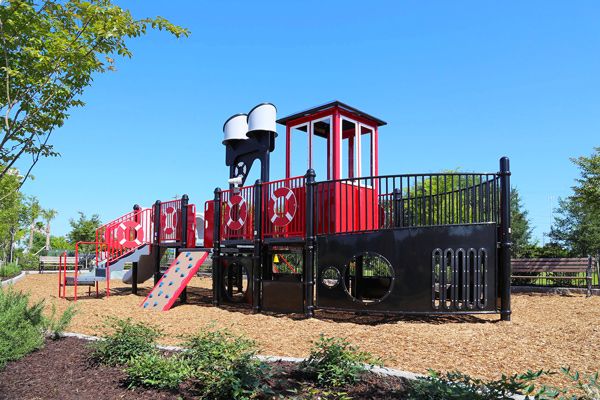 The striking red and black tugboat was designed for younger children, ages 2-5. The many custom components designed for the tugboat provide endless adventures for toddlers while also contributing a visually appealing structure to further enhance the aesthetics of the park. 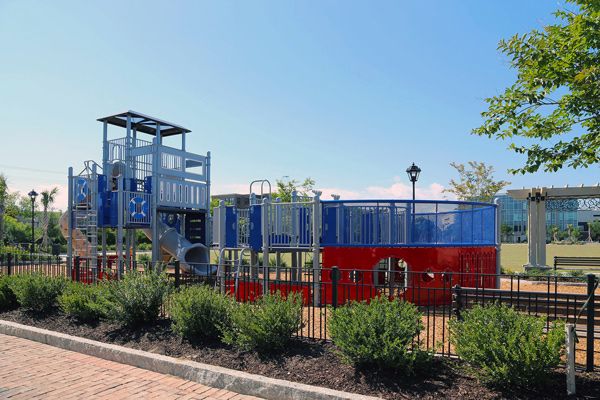 The larger ship structure was designed for older children, ages 5-12. With taller slides and more challenging components, the innovative custom ship is designed to excite and engage older children seeking a bigger adventure in their play.

ColeJenest & Stone worked with the Custom Design Studio at Miracle Recreation Company to design two separate custom playgrounds for the park that tied into the nautical theme. This began with preliminary meetings to determine a design concept for the playgrounds. Once a direction was settled, the Architect and the Miracle Recreation Custom Design Studio met face-to-face to continue developing the project through the various stages of ideation to define the final designs for both playgrounds. To finish off, material and color selections were made to ensure the vision and expectations were ultimately met.

Kids can take the wheel and see in all directions as they control the ship. Freestanding with large openings, kids and parents have a 360 view of who’s in control. 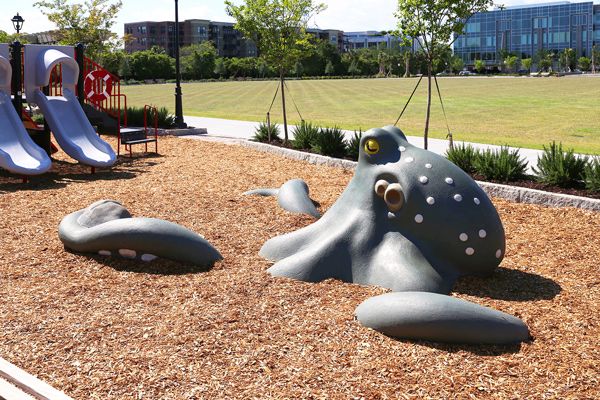 Behind the small boat is an octopus with welcoming tentacles to promote both pretend and active play for the younger age group.

The toddler playground features a tug-boat play structure and a surfacing Octopus structure to spark the imaginations of children. The tug-boat features a multi-level custom bow with crawl through access below deck containing portholes and vents for increased visibility. A custom wheelhouse with large windows and a moveable ship’s wheel resides in front of the towering smokestack while a custom boat race panel sits at ground level. Custom barriers were added on both levels to break the repetitiveness of vertical steel tubing. Age appropriate climbers and slides are part of the structure along with a Fun Fone from the smokestack to call out to the shore. A custom octopus can be seen peeking out of the surface to inspire additional creative play for the younger children. 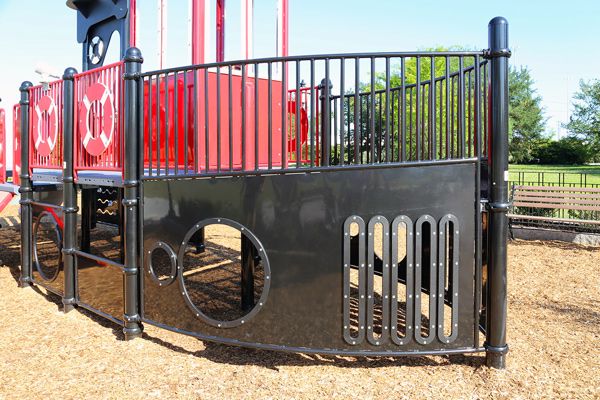 Large openings and slats on the durable steel bow provide visibility, while offering multiple play opportunities at the lower and upper level. 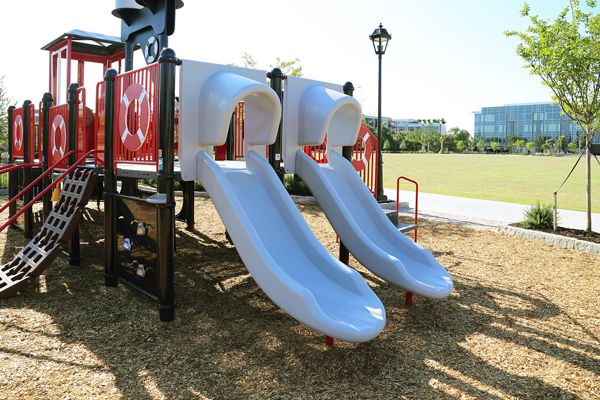 From the stern, the younger age group can race down the Groove 2 slides and race their boats on the custom play panel at ground level. Park benches, fencing, lighting, and landscaping complement the playground while the fields are visible in the background. 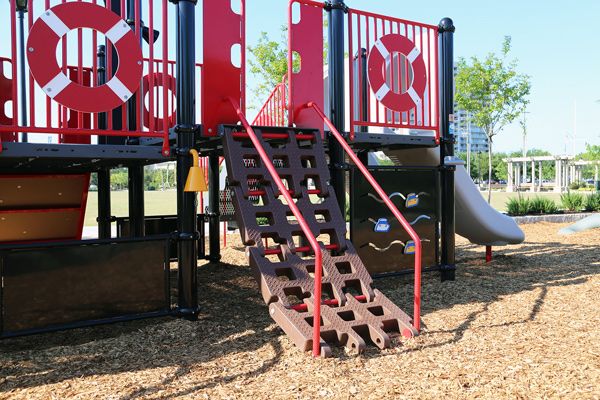 The play areas for older children features an innovative ship structure designed to entertain older children seeking an oceanic adventure. Features include a custom bow with upper and lower access with portholes, vents and perforated steel on the upper level for visibility, and central access from rope and chain climbs to the 4’ level. The multi-level wheelhouse contains a moveable steering wheel, seating, a tube slide that wraps inside the structure, and lookouts to peer down below. Life preserver panels are visible throughout and custom barriers are again included to break the repetitiveness of vertical steel tubing.  Age appropriate climbers, slides, and play features fill the structure along with Kids’ Perches with Delight-O-Scope telescopes to the back of the bow and slightly above for added play. 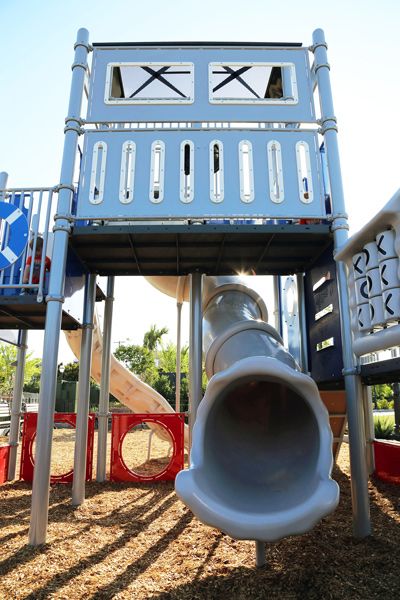 A view from the ground to the towering wheelhouse with large openings to promote visibility. The tube slide provides a quick exit from above.

A view from the wheelhouse gives an impressive look of the bow and further points ahead. The bow is open at the center allowing access at several points. The barrier at the front is perforated steel to promote visibility while still providing a strong visual accent.

Bringing it All Together

Planning, designing, developing and constructing the entire park project required approximately 16 months. Construction began in January of 2014 and the Grand Opening was celebrated on May 16, 2015. Every detail was carefully planned and considered, from the special surfacing with a below-surface drainage system on the athletic fields to promote quick drying after heavy rains, to the more than 100 trees planted around the park. A commissioned art sculpture featuring oversized stainless steel birds above the water of a large water fountain is just one example of the many beautifully crafted elements that make this park special. That’s because, according to Charleston Mayor Joe Riley, “One of the most important things that a city does, and can do, is build a park, because parks are forever. Parks are for the citizens,” Riley said. “A building, maybe at some point in time, will be redeveloped or it might be changed. But if you build a park, it’s a public space forever.” 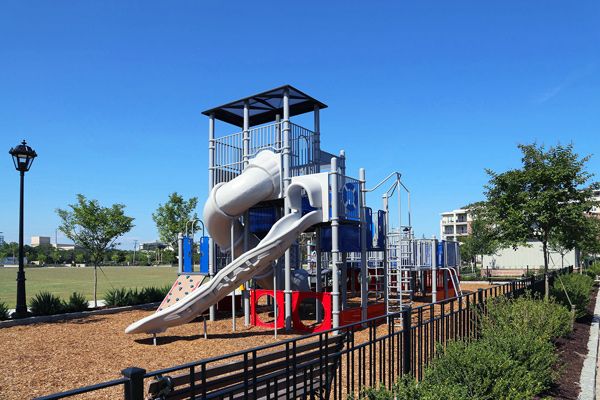 The custom multi-level wheelhouse gives kids the opportunity to take the wheel with a fantastic view and two thrilling slides options are available for quick exit.  The soccer fields are visible in the background.

Miracle Recreation® is a PlayPower®, Inc. company. © 2020 PlayPower, Inc. All rights reserved.
We use cookies to improve your browsing experience! By continuing to use this website, you agree to the terms outlined in our Privacy Policy, and to the receipt of targeted communications through our marketing platforms. We do not sell your personal information, and only obtain personal information with your consent. For more details, please refer to our Privacy Policy.
I agree
Request Quote Top