The Most Popular School Playground Games

Children play many classic outdoor games on the playground or at the neighborhood park, many of which have been played for generations, and some are new for this generation of youngsters. Kids love playing, whether it’s at recess, after school, on the weekend or all summer long.

There are some games kids often play on playground equipment, whether it’s making believe they’re in a castle or mountain climbing. Kids have such active imaginations, though, that they can play games even when there’s nothing but asphalt, blacktop or a sidewalk to play on. Games help kids stay in shape, develop their creative abilities and build social skills — what could be better?

It would be impossible to list all the different types of children’s playground games, especially when you consider all the children’s games worldwide. The following list, however, includes many simple and classic outdoor playground games that children have played in schoolyards for generations: 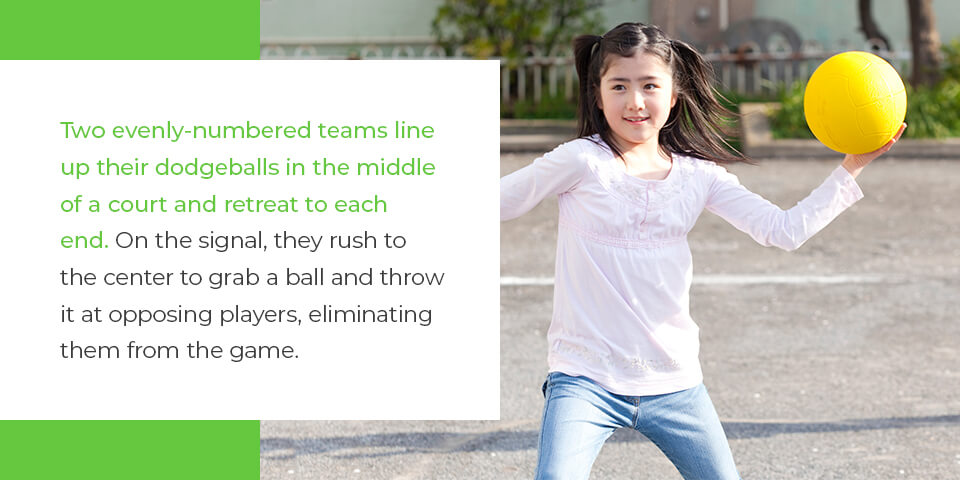 Two evenly-numbered teams line up their dodgeballs in the middle of a court and retreat to each end. On the signal, they rush to the center to grab a ball and throw it at opposing players, eliminating them from the game. The team that eliminates all players from the other team wins the game.

A popular jump rope game, double dutch requires at least three people. Two players swing jump ropes in opposite directions, while the third player jumps between them without disrupting them. Players often chant or sing a rhyme to help time the jumps.

3. Heads Up Seven Up

Seven “choosers” make their way around a group of players who have their heads down and one thumb raised. Each chooser taps one thumb, and the players try to guess who touched their thumb. If they guess correctly, they swap places with their chooser.

An excellent way for children to improve their balance and hand-eye coordination, hopscotch involves a series of numbered squares drawn in a grid on the pavement. Children must throw an object into one of the squares and retrieve it using a sequence of hops without touching the lines.

One player chooses an object and says, “I spy with my little eye,” giving a description of the item like its color. Players take turns guessing what the item is. 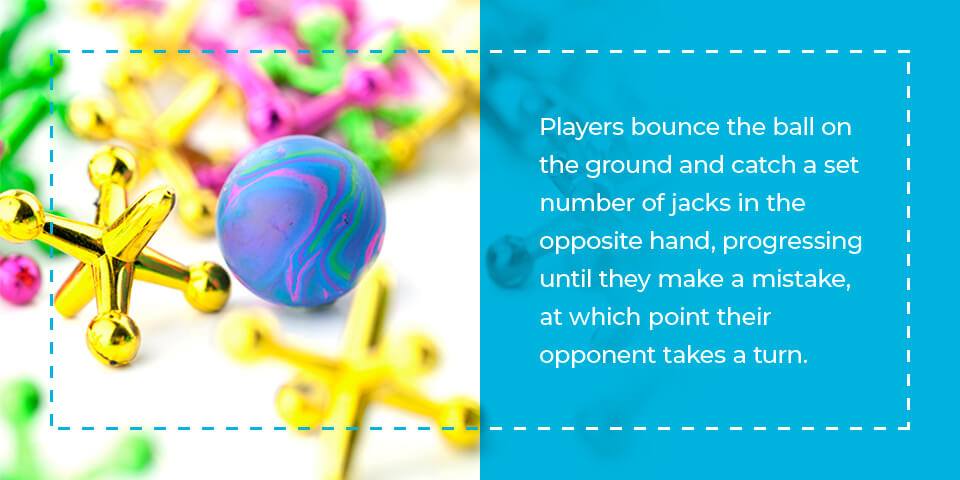 Another great game to play on the playground is jacks. Players need jacks and a small rubber ball for jacks. Players bounce the ball on the ground and catch a set number of jacks in the opposite hand, progressing until they make a mistake, at which point their opponent takes a turn. The first player to progress through the series of throws and catches wins.

A good game for a single child or a team, jump rope has nearly endless variations. Players swing and jump over a rope, seeing how many jumps they can make without touching it.

Kickball is one of the most popular outdoor games for kids. The game is similar to baseball, except players kick a dodge ball instead of swinging a bat.

Two teams line up and link arms to form a chain. Players take turns calling over a player from the other group using the “Red Rover” chant. That player must break the chain or join the team.

The player designated as Mother stands with their back to the rest, who request to take various movements, like two crabwalk steps or five hops, toward Mother. Mother grants them permission, or not, until they are tagged.

The Benefits of Kids Games

With childhood obesity rising in America, active games are particularly important for kids to play. Activities that utilize playground equipment, jump ropes or other body movements help get kids moving. When kids are inactive during their recesses at school and spend their free time at home playing video games and watching TV instead of going outside, they are developing behaviors that could hold them back for the rest of their lives.

Games that rely on children’s brains and encourage teamwork are equally beneficial because they help to strengthen mental and social skills that will come in handy as they enter middle school, high school, college and the job market. The games that kids play on the school and park playground offer many benefits, whether they’re creative games that use their imagination or active games that work out their body. Children should be encouraged to play these simple playground games as much as possible. 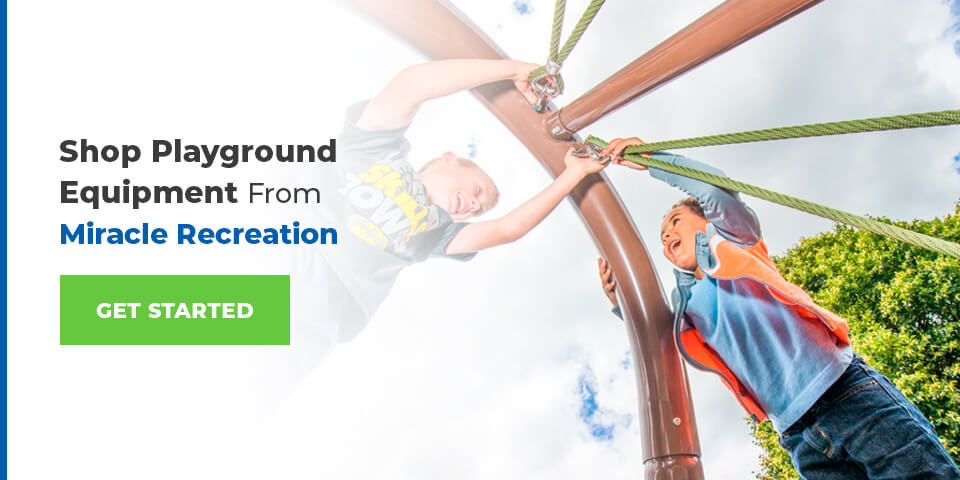 Playground games are a vital part of a child’s development, and as a bonus, they’re fun! With a list of entertaining indoor or outdoor games for kids, you can help them grow in important ways.

Miracle® Recreation is a PlayPower®, Inc. company. © 2022 PlayPower, Inc. All rights reserved.
We use cookies to improve your browsing experience! By continuing to use this website, you agree to the terms outlined in our Privacy Policy, and to the receipt of targeted communications through our marketing platforms. We do not sell your personal information, but are required by law to provide the following link to you: Do Not Sell My Personal Information. For more details, please refer to our Privacy Policy.
Ok
Request Quote Top